On today’s episode, Emily interviews Dr. Matt Hotze, an administrative director at Rice University and co-host of the Helium podcast. When Matt moved to Durham, NC for his PhD, he immediately purchased a 3-bedroom house and rented the two extra rooms to his labmates. The rent Matt collected from his two housemates covered nearly all of his mortgage payments during his years in grad school, though he had some financial bumps in the road as well relating to house repairs and his dual relationship with his housemates. Ultimately, his decision to sell the property also hinged on his personal relationship with his tenants. Matt shares the overall effect this investment had on his finances and his three key pieces of advice for another early-career PhD considering this route.

Links Mentioned in the Show 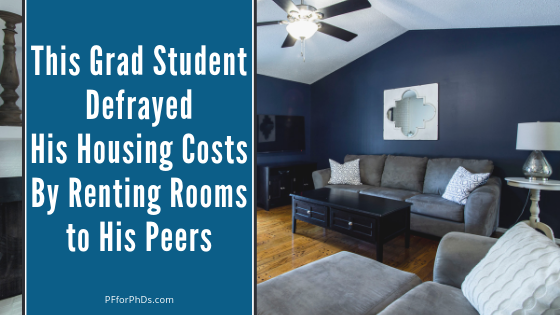 Would You Please Tell Us More About Yourself?

Matt has a PhD in environmental engineering. His advisor moved from Rice University to Duke University near the start of his PhD. He purchased a home in Durham when he moved there in 2005. After he finished his PhD in 2008, he did a postdoc in France and then another postdoc at Carnegie Mellon. Subsequently, he had a career in publishing with the American Chemical Society, serving as the managing editor for four journals, where he learned the business side of science. Currently, he works at an engineering research center at Rice with 80% of his time, and the other 20% of his time is dedicated to the Helium Podcast.

How Were You Able to Purchase a Home During Grad School?

It is no mean feat to buy a home during grad school!

Further reading: Purchasing a Home as a Graduate Student with Fellowship Income

First, Matt was “blessed” to not have any debt from undergraduate degree.

Second, when he started grad school in Houston, lived with his parents for most of his first year and banked much of the stipend. Living with his parents in the suburbs was cheaper because the distance from home to campus impeded going out and spending on entertainment. His motivation to save money was due to his upbringing; since he was able to save, why not do so? He expected there to be some use for it eventually, though he didn’t have specific plans to buy a home when he started. Saving the money wasn’t a big sacrifice as living with his parents was comfortable.

Third, in 2005-2006 the houses in Durham were not that expensive. This was after the dot com bubble burst in early 2000s and the housing crisis hadn’t hit yet. Matt hadn’t necessarily planned to buy, but he saw that the nice, recently built apartments were rather expensive to rent.

Though Matt had enough money for a 20% down payment, he still needed his parents to co-sign his mortgage because his income alone wasn’t sufficient to support the mortgage payments. He bought a modest 3BR home and rented out the other two bedrooms for below market rate. The purchase price for the home was approximately $200,000.

Further listening: How to Qualify for a Mortgage as a Graduate Student or PhD, Even with Non-W-2 Fellowship Income

Matt bought the house even before he moved to Durham, so he never rented there. He felt he was on a time clock to own the home for long enough during his PhD to make the transaction costs worthwhile. He decided he would either buy right when he arrived in Durham or he wouldn’t do it at all.

Matt’s first tenants in Durham were the other grad students in his lab also moving with his advisor, which also influenced his decision to purchase right away.

What Were the Pros of Renting Out Rooms to Peers?

1) Matt had almost zero housing expenses as the rents from the two bedrooms basically covered the mortgage each month.

2) Matt’s house became the gathering spot for his grad school friends, so instead of spending money going out they would drink beer and play board games at home. (Emily had a similarly inexpensive social experience in grad school.)

3) Didn’t have any issues with the great majority of his tenants.

What Were the Cons of Renting Out Rooms to Peers?

1) Once Matt moved on from his PhD, he didn’t know his tenants quite as well. One of his tenants asked to pay his rent late a couple times. It wasn’t possible to handle this completely professionally because of the social ties between him and his tenants. This did end up working out, but it was stressful to handle this, especially from afar. Matt was especially concerned about being fair to all his tenants but not establishing a precedent that it’s OK to pay the rent late. The rental agreement between Matt and his tenants was helpful in this case, not only the legal components but also to set expectations.

2) The home inspector didn’t catch some flashing around the chimney, so a water leak developed soon after the purchase. Matt used some additional cash he had on reserve (~$500) for this repair, so it was a good thing he hadn’t used all his cash on the purchase. Another time, the water heater exploded. Thankfully replacing it didn’t cause an issue because Matt already had cash built up for these kinds of repairs. Emily references the 1% rule: You can expect to pay 1% of the home’s value in maintenance/repairs each year – but that’s only an average! It can be much higher or lower in any given year.

Why Didn’t You Sell When You Left Durham?

When Matt left Durham for his postdoc in France, it was not a difficult decision to keep the property. He still had tenants in place who would take a couple more years to finish their PhDs, and with three rooms rented out the property was now earning money above expenses. One of Matt’s friend-tenants served as the property manager so he didn’t have to hire a professional company.

At the end of grad school, Matt had a good amount of savings built up, and after the postdoc he had even more saved. This really set him up to be financially successful in subsequent stages of life. He lived in Pittsburgh for his second postdoc. When Matt married his wife and combined their finances, he was able to significantly contribute to their nest egg. It was great to not have to worry about (non-mortgage) debt.

All of this financial success came from the germ of financial parental help during college and that first year of grad school. Good financial fortune and bad financial fortune early in life do not guarantee any particular financial outcome, but certainly put momentum behind your finances one way or another.

How Did You Decide When to Sell the House?

When his friends finished their PhDs at Duke, Matt no longer felt able to hold on to the property. He didn’t have the bandwidth at the time while working in an intense postdoc position and applying for faculty positions to figure out how to hire a property management company from afar. Deciding to sell was really a trust issue. If he didn’t trust his tenants through personal relationships, he didn’t want to be a landlord any longer. It’s not always about numbers, sometimes it’s more about your feelings!

Matt ended up selling in 2009, which was pretty bad timing with respect to the national economy. He sold the house for just about the same price that he bought it for. Even without the property appreciating, the financial benefits he experienced through those years made it a good financial decision. Even though he didn’t make any money on the house, he defrayed all his housing costs when he lived there and continued to make money afterwards.

What Advice Would You Give to a Grad Student or Postdoc Who Is Considering Buying a Home and Renting Out Rooms?

1) Use a calculator to figure out whether buying and renting out rooms in a home makes sense financially in terms of the costs you will incur and the rental prices.

2) Are you OK having uncomfortable conversations with your tenants? Someone will inevitably not pay rent or break something or something stupid in the house. This will happen whether you know the renters or not!

3) Are you comfortable making basic repairs on your own? It’s expensive to outsource it all the time! Are you able to talk with vendors and negotiate? This is a needed skill.

4) What’s your gut feeling on owning rather than renting? You’ll make a good decision!

What Is the Helium Podcast?

Christine and Matt co-host the Helium Pocast. They help early-career researchers – senior grad students to early faculty – navigate the transition from grad school into first faculty position, from landing the position to navigating the position to advancing within the position. They bring on interviewees to talk about career transitions. Check them out! New episodes come out every Tuesday.