In this episode, Emily interviews Dr. Shana Green, a postdoc at the Centers for Disease Control and Prevention in Atlanta. Shana finished her PhD with $108,000 of debt, and she decided to side hustle to pay it off as fast as she could. After trying several academic and non-academic side hustles, she is currently chiefly working as a driver for GrubHub. She’s on track to be completely debt free in less than four years total. We discuss the strategies she’s used to optimize her side hustle, how she feels about side hustling as a driver, and her goals for her YouTube channel, The Wealth Vibe. 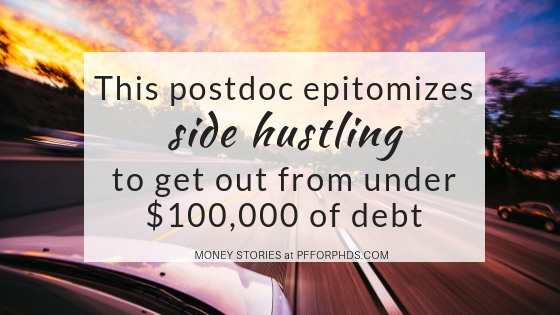 Dr. Shana Green is a Gates Millennium Scholar. This program funded all of her undergraduate education, and provided some funds for graduate education. Shana went to Howard University for her bachelors of arts in Anthropology. She got a Masters of Public Health at Columbia University, where she had to take out student loans for rent, food and living expenses. She went to the University of South Florida for her PhD in Public Health, where most of her education was funded but she had to take out some loans for her fifth year. She graduated in 2017 and worked as a postdoc at the Centers for Disease Control and Prevention (CDC). She recently got a new position as a contractor for the CDC.

4:54 What was the total of your debt when you finished your PhD?

She didn’t have to go into repayment for her student loans during her postdoc because she qualified for graduate fellowship deferment. She wanted to tackle her other debt first. Now she has about $63,000 in debt remaining. She paid off the credit card, IRS debt, and medical bills. She is very close to paying off her car. She will only have her student loans remaining after two years of he repayment journey.

Shana says that when she moved to Atlanta, she started side hustling right away. She couldn’t afford to go out and meet people and get to know the city. She went straight to the grind and working hard to pay off her debt.

8:50 How does your postdoc salary affect your debt repayment journey?

Shana is grateful she has a higher stipend than many postdocs. She was making about $70,000 gross annual pay from her postdoc stipend at the CDC. This is in contrast to the National Institutes of Health minimum stipend that was just below $50,000 annual stipend. She was in an Oak Ridge Institute for Science and Education (ORISE) funded postdoc, which compensates based on education and work experience. She received about $5200, then she had to pay quarterly taxes. Her take home was somewhere around $4,000.

11:38 What are the different side hustles that you’ve tried since moving to Atlanta?

Shana says the first side hustle she tried was Instacart. In this job, she shopped for groceries and delivered them. She started that in October 2017. When Instacart changed their system so she made less money, she tried other jobs. She tried virtual assistance, Upwork, and local food delivery service. Since April 2018, she has worked for GrubHub and still does Instacart every now and then. She also does freelance research through Upwork. She says GrubHub is her “bread and butter” as a side hustle.

Shana explains that when a customer places an order, she gets a ping on her phone. GrubHub provides the details up front to help her decide if she wants to accept it. She is free to reject orders. If she accepts, she goes to the restaurant to pick up the food and bring it to the customer. She contrasts this to Instacart, where she had to put together the order herself instead of just picking it up.

She makes about $20 per hour with GrubHub. The least amount she makes is $15 per hour, and the most is $25 per hour. She spends about four hours a night doing GrubHub. On the weekends nights she works 5 hours. She works at minimum three days during the week. There were several weeks that she worked every day of the week. After her work at the CDC for the day, she almost immediately started her GrubHub work.

17:34 How do you decide which GrubHub orders to take?

Shana keeps three things in mind: the payout, the distance, and whether the person tips. GrubHub pays a minimum of $3 base pay, a mileage contribution, and tips if the customer chooses. She says if the person has not tipped through the app, they won’t tip in person. She tries to take orders $8 or $10 or more. She also tries to do orders within a four mile radius. She maximizes the base pay and the tips, not the mileage. Shana mentions some restaurants are unreliable, which she learned through trial and error, and she factors that into her decision.

22:12 Has anything really bad or really good happened to you as you worked for Instacart and GrubHub?

Shana says she had unpleasant interactions with Instacart customers. She tells stories about customers that insult her and imply that she is “lesser” for working these side hustles. These customers have no idea that she has a PhD and works as an epidemiologist. Shana shares that she has felt down about having to work side hustles that are not using her expertise, but she gives herself pep talks and reminds herself this is temporary.

25:08 Why didn’t you limit your side hustles to PhD type of work?

Shana explains that she tried through Upwork to offer data analysis and research consultation services, but she didn’t get any clients. She realized that this wasn’t going to work, because she needs quick money. She wanted to be able to make money like an Uber or Lyft driver could.

She was a little ashamed of doing this at first, and she didn’t tell anyone except for her mother and her boyfriend. She felt like she had reached a level of success, like she was “Dr. Green” and she used to teach at a university. She worried that people would view her work at Instacart and GrubHub as a step back. Now she wants to inspire people to take on their debt and work hard for their financial goals. This is why she started her YouTube channel “The Wealth Vibe.”

Emily says that if anyone speaks negatively about this work, as if this work is “beneath them,” that speaks poorly of that person. She also says that Shana is on a great career trajectory, but the work for many PhDs is more limited and many have to be in adjunct position, which typically does not pay well. Emily says Shana is living like no one else like now because she is working hard, but in two years Shana will be debt free and living like no one else in the positive sense.

Shana shares that she also teaches an online course in Epidemiology. This pays $3,000 per semester. She says she makes way more money through GrubHub than she does as an adjunct. Shana says she found that PhD work does not pay well. Emily adds that there’s not enough volume, or demand, for side jobs for PhDs.

Shana’s YouTube Channel is called The Wealth Vibe. She creates videos to help people increase their income, help them budget, so that people can build their wealth. She posts monthly videos about making her budget and paying off her debt. She also makes videos about her side hustles and how to maximize money you make. She has made videos about taxes, because her taxes are not withheld and she has to save for tax payments. She says she reaches a broad audience of people who are GrubHub drivers as well as who have PhDs.