In this episode, Emily interviews Dr. Jill Hoffman, an assistant professor at a university in Portland, OR. Decisions around finances, family, and career are bound tightly together for Jill because of her family’s student loan debt. Jill and her husband Mike are aggressively paying down his student loans while counting on Public Service Loan Forgiveness for hers. Required minimum payments also factored into their decision for Mike to become a stay-at-home parent to their toddler after they moved for her tenure track position. Emily and Jill discuss the rationale behind these decisions and how Jill is documenting her life as an assistant professor and mother on her website, Toddler on the Tenure Track.

Links Mentioned in the Episode 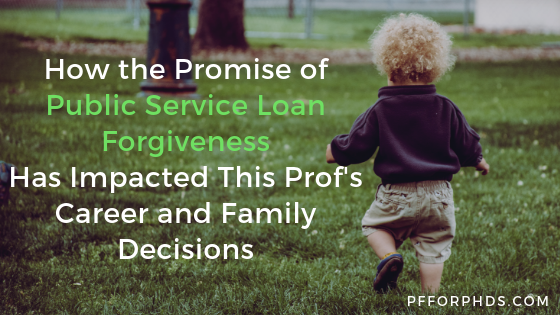 Will You Please Introduce Yourself and Your Family’s Finances?

Jill is an assistant professor at a university in Portland, Oregon. She has a PhD and master’s in social work and a bachelor’s in psychology. She has a husband, Mike, and a daughter, Ellie, who is almost three years old. Mike is currently a stay-at-home dad, but his background is in counseling psychology (master’s). When they moved to Portland for her job, it made more financial sense for him to stay home with their daughter than to get a job due to the high cost of childcare and cost of living overall.

Their recent focus has been on paying Mike’s student loans. In December 2018 they re-evaluated their debt and had a balance of just over $100,000, and they used some savings and cash flow to pay down the debt to its current balance.

Why Are You Attacking Mike’s Debt and Paying the Minimums on Jill’s Debt?

They are paying the minimum payments on the 2.5% undergrad loans. They are low priority due to the low interest rate.

Jill is enrolled in Public Service Loan Forgiveness (PSLF). Theoretically, after 10 years in the program her master’s degree loans will be forgiven, so they are paying the minimum for now. They are crossing their fingers that it will work out. The minimum payment doesn’t cover even the accruing interest fully or pay down principal at all. (This is because Jill is enrolled in an income-driven repayment plan with a repayment period of greater than 25 years.)

They are paying the minimum on one of Mike’s loans and attacking the higher-interest loan with all extra money each month.

Jill’s undergrad loans do not qualify for PSLF because they were taken out before 2007 (if she recalls correctly). At least for her, just her master’s degree loans qualify for PSLF. She was in undergrad between 2002 and 2006.

PSLF is for people who are in certain career types: non-profit and/or government employer may qualify. As Jill works for a public university, she is a state employee and her institution qualifies. Her job post-master’s also qualified for PSLF.

This is sort of a game because you are supposed to stick to making only the minimum payments even if you could pay more. often, and the payments often don’t even cover the full interest so the loan balance may be growing throughout that time. You have to do everything letter-perfect and hope that your loan balance is forgiven

The first crop of people became eligible for forgiveness in 2017, but the reported rate of actual forgiveness is quite low (1%). Many people who thought they were doing everything right for PSLF have been denied forgiveness.

Given the Low Rate of Actual Forgiveness Occurring, How Does Jill Feel About It?

It’s a daily struggle deciding which loan to prioritize because Jill’s loans are at a higher interest rate.

Mike has loans and is staying home right now. He might qualify for PSLF if he got a job, but it would still take 10 more years of repayment before he would qualify for forgiveness. That time frame was not appealing for them.

If Mike’s 6.5% interest loans are paid before Jill’s four remaining years in the PSLF program are up, they might consider repaying more of Jill’s loans. However, she doesn’t project that to happen within that timeframe. Since they will have to pay for more than 4 years, they’ll wait and see what happens with PSLF and hope for the best.

Emily likes that Jill and Mike are not resting on their laurels and going for the lowest possible minimum payment by both enrolling in income-driven repayment programs and only paying the minimums. Instead, they are attacking the debt in a strategic way. They are being proactive instead of just signing up for everything available to minimize payments.

What Else is Going on for You Financially Aside from Student Loan Repayment?

Jill’s employer contributes to her retirement funds. She is in a pension plan calculated based on years of service and highest gross salary upon retirement eligibility. In addition, they contribute 6% of her salary into a targeted retirement account (doesn’t come out of her paycheck). Jill doesn’t add anything to this for retirement for the time being. This does make her nervous.

Jill and Mike both have retirement funds from previous jobs, but they are not adding to them.

They recently started thinking about contributing to a Roth IRA given their lower current tax bracket vs. their likely higher future tax bracket. They are 34 years old and would like to be doing more on retirement, but they aren’t doing much for that right now.

Once they have the debt paid off, they will have much more cash flow to direct toward retirement or another goal.

How Did You Decide for Mike to Be a SAHD and Did Finances Play a Role?

When they moved to Portland for Jill’s job, Mike didn’t have a job lined up. Their plan was to move and find childcare, and then Mike would get a job. Infant care is really hard to come by and it’s very expensive. They were on a lot of waiting lists and had to pass the time until a spot became available. During that time, they were figuring out finances.

When a spot became available, it was $1,500/mo for full-time infant care at a childcare center. They enrolled and Mike started looking for a job. Jill set up her FSA to pay for the childcare. Ellie was enrolled for about a week when they really delved into their finances if Mike got a job. Their loan payments would go up to at least $1,000/mo, they would be paying $1,500/mo for childcare, plus they would have higher transit expenses and higher income taxes. Then they would be all the time spent at the job and commuting! To them, it didn’t make sense time-wise and financially for Mike to work given his employment prospects. In Ohio, he was making about $45,000/year, and the cost of living was much less. In Oregon, his salary wouldn’t be as much as Jill was making, and his salary would go largely toward loans and childcare. They thought, why not stay home? He was excited to stay home as well.

Emily thinks that what you want for your family doesn’t come into play as much as it should. There are financial arguments for one parent to stay home and financial arguments for both parents to work. But what about what the parents want individually and as a family? Personal finance is not just about numbers and money! In Jill and Mike’s case, there wasn’t a huge financial hit for Mike to become a stay-at-home dad.

Before Mike and Jill had Ellie, they joked about Jill working and Mike being a SAHD without thinking that was a real possibility. It’s kind of cool that it worked out.

What Financial Advice Would You Give Your Past Self?

Out of state vs. in state designation doesn’t matter much to funded PhD students though it does to their departments at public universities. However, for a master’s degree being paid out of pocket, this matters a lot! Employers do fund master’s degrees, especially part-time. Doing the PhD was always Jill’s plan so doing the master’s slower would have been fine.

Mike’s master’s degree was helpful for him to get a better job in Ohio. However, he also chose to go to a private university for his master’s instead of an in-state university, so the costs were a lot higher. Now he thinks he should have gone to the state school he got into and reduce his debt. Once Ellie is in school, having the master’s will help him get another job.

Emily also went to private college and it was a huge price tag that her parents paid. Now, she wants to make public in-state university seem very attractive to her children!

What Is Toddler on the Tenure Track?

Jill started Toddler on the Tenure Track in December 2018 and is still figuring out what it’s about. She wanted to create a space to talk about how she’s doing her junior faculty job with young kids, such as how to be a whole person in a job that’s trying to consume 100% of your energy. It’s her way to document the process of being a whole person in academia and not be sucked into working 24/7 and to document her path through the tenure process. She writes about what’s worked for her and not worked in terms of planning and organization of being a faculty member. That’s a huge part of her job that’s not widely discussed. Some of the strategies she writes about might work for others.

Jill has written some logistical pieces, such as on the process of becoming a tenure-track faculty. She moved cross-country for the job! As a grad student, she would have wanted to know what being a faculty looks like on a daily basis. Educational debt is also a huge part of the lives of people who work in academia, she so also shares about her finances and loan repayment journey.

Go check out Toddler on the Tenure Track if you are a faculty member and parent or aspire to be!