On this episode, Emily interviews Nicholas Giangreco, a bioinformatics graduate student at the Columbia University Medical Center. Nick’s expenses in Manhattan are relatively high – such as spending over 50% of his net income on rent – but his stipend still allows him to spend on his priorities and still save money consistently. Nick lived very frugally while he was paying off his student loans prior to grad school, and now applies his thoughtful budgeting skills to enjoying life in Manhattan without breaking the bank or detracting from his research. 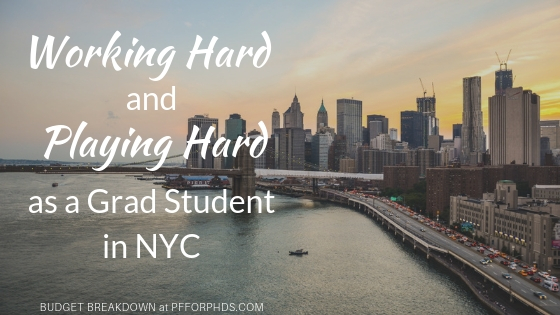 Nick Giangreco is a bioinformatics graduate research assistant at Columbia University Medical Center in New York City. He started his program in August 2016. His post-taxes pay is approximately $1,300 biweekly.

2:58 Q2: What are your five largest expenses each month?

Nick’s top expense categories are rent, health, transportation, and food. His miscellaneous and entertainment expenses are considerably low. He uses a spreadsheet to monitor his spending.

Nick lives in a studio apartment located on-campus and managed by the university. He pays $1,200 for his studio, which is lower than nearby off campus studio apartments that are $1,500 to $1,600 rent. Nick recognizes that he could find housing options near campus for less than $1,200 monthly rent. He mentions his friends who share four bedroom apartments and each pay $600 for their room. Finding a place in New York City is challenging. If you don’t find somewhere on Craig’s List, you may need a broker and to pay the broker fee.

Nick says the majority of graduate students live on-campus. To accommodate the demand for on-campus housing, the university has three tiers of priority consideration for housing applicants. The first priority tier is international students, the second tier is students from outside the New York – New Jersey – Connecticut Tri-State area, and the third tier is students from within the Tri-State area.

According to Nick, living on-campus makes graduate student life easier. Nick has a 15 minute walk to work, and he avoids commuting on the subway. The university gives current residents the first priority to renew leases. Nick plans to renew his lease for his on-campus apartment.

Nick spends a few hundred dollars per month for pilates sessions. He sees a personal pilates trainer in the West Village and pays $100 per session. He goes to physical therapy and rehabilitation at the hospital at Columbia. The copay is $20, which adds up since he has an appointment every week.

Nick’s health insurance does not cover his pilates session, but he likes his personal trainer and gets value out of the sessions. He first tried going to pilates classes at the university’s gym for no charge, but he was dissatisfied with the generalized approach of group classes. He wanted something personalized for his needs, so it is his priority to budget for pilates classes.

Nick estimates that he spends $200 to $300 per month on transportation and travel, or as little as $100 in a month if he doesn’t leave New York City. He puts $20 on his subway card and adds as needed. Additionally, he takes taxis and Ubers to get around Manhattan. Though taking a taxi to the JFK airport can be expensive ($70), the subway takes two hours. He uses Amtrak to go to his hometown, but those tickets add up. He also looks for cheap tickets from Megabus.

Nick spends less than $200 per week on food. In his studio apartment, he has a kitchenette which has a stove but no oven. He doesn’t buy groceries that require baking. He buys non-perishables and items that keep well. Some of his go-to items are sweet potatoes, oatmeal, and popcorn. He takes out $20 per week in cash for use at the food trucks, which only accept cash. He buys gyros for $5 and coffee for $1 from the food trucks. He goes to restaurants or diners once or twice a week.

Nick looks for free food from graduate school events. He is part of a Slack group for graduate students in the department, where people share information about free food. He eats food at seminars, lectures when alumni are invited, and club events.

Nick’s kitchenette does change how he approaches his food budget. When he lived in Washington, DC, he lived in a house with a kitchen. He used to batch cook on the weekend and set aside portions of leftovers for the week. He would host friends for meals. In New York City, he doesn’t have room to host anyone and can’t cook very much. He microwaves sweet potatoes and makes rice and beans on the stove. He keeps leftovers from events. He doesn’t plan his food for the whole week, instead he plans by the day. Nick thinks he could plan better, but right now he needs to focus on his PhD work so he needs the convenience.

Nick says there is a lot to do in New York City. He doesn’t spend much money on entertainment because he does a few cheap activities. He goes to clubs and university events. He sees plays for $10 on the Columbia Medical Center campus. He saw Spongebob the Musical for $30. Though Nick has friends who go out for drinks every day, Nick doesn’t buy much alcohol.

33:30 Q3: What are you currently doing to further your financial goals?

Nick recently paid off all his student loans. Before starting his PhD, Nick lived in DC for two years. He lived a very frugal lifestyle, and took two and a half years to pay off his student loans. Now, Nick is working on his rainy day fund so he can create a financial cushion in his budget. He spends about $2,300 per month of his $2,600 monthly income, so he puts the rest to savings.

Nick keeps a budget in google sheets to log his expenses. He wants to become conscious of his spending habits. He is looking into passive investing approaches and learning about retirement. Columbia Medical Center provides graduate students the option to invest with Vanguard. Though there is no matching offer, he determine an amount to withhold out of his biweekly check. He called the financial office and asked explicitly about this retirement program applicability to graduate students, and he is considering it.

39:14 Q4: What don’t you spend money on that might surprise people?

Nick doesn’t spend much money on entertainment or alcohol. He takes it seriously that he is in New York City for graduate school, so he prioritizes his studies and his work. He doesn’t go to Brooklyn or the East Side, instead he goes to Central Park for free and finds cheap shows at comedy clubs. He uses the subway because this transit option is $20 to $30 less than taxis and Ubers. He will listen to podcasts while he’s on the subway.

43:07 Q5: What are you happy with in your spending and what would you like to change?

Nick is happy with his food spending and his entertainment spending. He has a social life and indulges in brunch with friends on the weekends. He wishes he could save more on rent, but he doesn’t want the responsibilities that come with living in a house. Landlord, roommates, and housing infrastructure problems add extra stress that he doesn’t want to deal with. He wants to concentrate on graduate school, and his studio apartment helps him focus. He also appreciates the security in his building, the community and the convenience. He lives on-campus and one block away from the subway. Ultimately, the convenience of the location is worth the high rent.

46:42 Q6: What is your best advice for someone new to your city who is budget-conscious?

Nick recommends living on-campus. He thinks the Columbia Medical Center bioinformatics graduate program pays well. He says the initial payment for first years is nearly $20,000 as a lump sum, which needs to be budgeted carefully. The Columbia Marketplace Facebook group is useful to find free and cheap items. The Grad Talk list-serve helps you find out about free and cheap items as well.

Nick says to enjoy yourself without going crazy, and to be mindful. Anyone considering New York City for a PhD program should know that grad school can be intense, New York City can be intense, but this is a time to work really hard while making good friends and good memories. Nick coordinates a Meetup group and leads an NYC chapter of an international organization. New York gives you access to broader networks and opportunities.

51:38 How do you budget your biweekly pay? How does it compare to other pay structures?

Nick used to work at the National Institute of Health in DC, where he monthly check. The biweekly pay does not change how he budgets, instead he enters his income twice a month into a spreadsheet instead of once a month. He had enough cushion money in his account to manage expenses, and knows that he will get another paycheck in two weeks. His spreadsheet helps him keep track.

55:41 Q7: Would you like to make any other comments on what it takes to get by where you live on what you earn?

Nick says it’s a great time to be a graduate student in New York City. So many people like to visit New York City, so it’s great for spontaneous reunions with friends. It’s easy to get out of the city if you want. New York City offers many opportunities, and you’ll interact with people from multiple universities, companies, and form a broad network.