“Actually, I get paid to go to school.” How many times have you said that to distant relatives and new acquaintances? If you look at it that way, being a funded grad student is a pretty sweet gig. But there are definitely downsides, like the low pay, sub-par benefits, and the weird tax situations that come with getting paid to be a grad student in the US. Receiving a 1098-T that has seemingly no basis in reality and having to incorporate it into your tax return – or worse, not receiving one – can become a real time- and energy-suck. The whole tax return support system seems to have been set up to help people who are in the red with their universities, not people who are in the black. Fortunately, there are solutions to these weird tax situations for fully funded grad students, and I’ve brought them to light for you in this point. 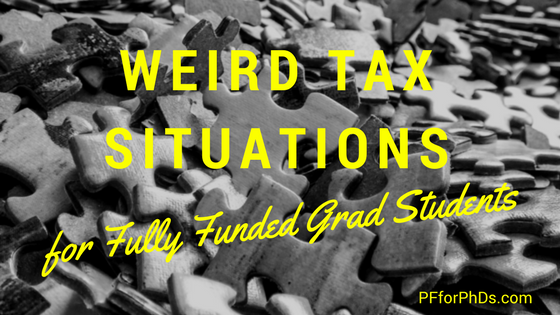 The points covered in this post are strictly to do with being a funded graduate student at a university.

The 1098-T looks like a super official tax form, rather like a W-2. However, I like to think of it as a communication between the university and the IRS that you, the grad student, have only been cc’d on. It’s not issued to help you properly report your income to the IRS. Its primary purpose is to let the IRS know that a student (or a student’s parents) might try to take an education tax break so that it can check the amount of the tax break claimed.

But fully funded grad students often do not claim net educational tax breaks. And if a tax break isn’t in order, it’s actually optional for the universities to even create a 1098-T. So as a fully funded graduate student, you might receive a 1098-T or you might not; the choice belongs to your university.

The only thing worse than not receiving a 1098-T is receiving one that is misleading.

But wait! It’s not always that simple. See Box 7? If that is checked, we’ve run into a calendar year/academic year issue. Sometimes the tuition, etc. for a winter or spring semester/trimester (beginning in January through March) is charged in or before December of the prior year. But are the corresponding scholarships that pay those charges posted at the same time? Nope! They often are posted in that January to March window. So the charges end up on the 1098-T for one calendar year while the corresponding scholarships end up on the 1098-T for the subsequent calendar year.

It’s not a good idea to take a tax break in one year only to have to pay a boatload of extra tax in the next year. The solution is to pair the charge with the scholarship that is earmarked for it. You do this by pulling the charge forward into the calendar year when the scholarship shows up.

So basically, your 1098-T isn’t reliable if Box 7 is checked, and you have to do your own arithmetic with the charges and scholarships that show up in your student account to find the proper numbers to plug into your tax return.

In addition, your 1098-T might not list in Box 1 all the qualified education expenses you are eligible to claim… More on that later!

Starting in 2018, the IRS eliminated the previously used Box 2 (qualified tuition and related expenses billed) in favor of Box 1. Many if not most universities therefore switched accounting systems between 2017 and 2018, and Box 3 is checked if that was the case. This potentially causes a double-counting issue if Box 7 were checked on your 2017 1098-T: the same charge for qualified tuition or related fees could show up in Box 2 of the 2017 1098-T and Box 1 of the 2018 1098-T if it was billed in late 2017 but paid in early 2018.

If You Have Scholarships and Qualified Education Expenses, You Can Choose between a Deduction and a Credit

With your qualified education expenses, at the graduate level you will choose between ways to use them to reduce your tax burden, and ultimately you may use both. (I’m leaving out some limitations such as what qualifies as an educational institution, income ceilings, and what the scholarships can be used for, so look those up before you make a final decision.) You can:

Please note that you can’t use the same qualified education expenses for more than one tax break.

You can find a complete discussion of how to choose among these three educational tax benefits in How to Prepare Your Grad Student Tax Return.

You Have to Figure Out Your Own Qualified Education Expenses

Oh, and did I mention yet that the definition of a Qualified Education Expense is slightly different depending on the tax break you’re trying to take? Yeah, that’s another weird tax situation for fully funded grad students.

Even though the same term, such as qualified education expenses, is used to label a basic component of many of the education benefits, the same expenses aren’t necessarily allowed for each benefit. – IRS Publication 970 p. 4

You Have to Report Excess Scholarship Income

Funded graduate students with net scholarship (or fellowship) income have to report it on their tax returns. This is a weird tax situation because it’s uncommon at the undergraduate level, so many people, even professional tax preparers, don’t know that you’re supposed to do it. But now that you know, it’s actually quite easy to do.

You report your net scholarship/fellowship income in the same line on your tax return as you report your wages, e.g., Form 1040 Line 1. You also need to print SCH next to the line so the IRS knows part or all of your income is not reported on your W-2.

Further reading: Where to Report Your Grad Student Income on Your Tax Return

Because graduate students are students, they might be considered dependents of their parents (or another relative) for tax purposes. You and your parents don’t get to choose whether they should claim you as a dependent or you should be independent based on what’s best for the family’s tax due; rather, you have to follow the IRS’s definition.

The conditions for being considered a dependent (not exhaustive) are:

For any years that the first three points above apply to you, you should fill out the Support Test to determine if you provided enough of your own support to qualify as independent. Keep in mind that education expenses count as support that you needed, but scholarships and fellowships that paid that support don’t count as being provided by you.

FICA (Social Security and Medicare) taxes seem like an unavoidable burden for employees and self-employed people. But even if you’re an employee of your university/graduate school (i.e., you receive a W-2 at tax time), you’re most likely not paying FICA tax because you have a student exemption. This exemption depends on both the primary function of the organization that employs you (i.e., educational) and your primary relationship with the organization (i.e., as a student rather than an employee).

The student exemption is almost universal for graduate students, but I have come across two exceptions that depend heavily on the exact wording of the exemption:

1) Graduate students at research institutions that are not primarily universities might not receive the exemption.

2) Graduate students, even at universities, whose primary relationship with their employer is as an employee rather than a student may pay FICA tax. For example, this might occur during the summer vs. during the academic year, and could happen without the student even perceiving a difference in roles. (This is not common; I’ve seen one example and it was for a senior graduate student at a public university.)

Graduate students receiving fellowships also do not pay FICA tax, but that is because they are not receiving wages rather than due to their student status.

Yes, there are a lot of weird tax situations for fully funded grad students. You have to do a bit of legwork instead of just blindly entering numbers from your 1098-T into tax software or ignoring your excess scholarship income. But if you break the issues down one by one, it’s actually straightforward to determine how to resolve them.