In this episode, Emily interviews Dr. Gov Worker, which is the moniker used by a PhD scientist and FIRE blogger. FIRE stands for Financial Independence and Early Retirement. As a PhD, Gov Worker’s motivation for and path to FIRE are different than most and specific to his high degree of training, and he thinks other PhDs should consider FIRE as well. In this second half of the conversation, Gov Worker shares what his family is doing to achieve FIRE, how being a PhD has affected his FIRE journey, and his financial advice for early-career PhDs. 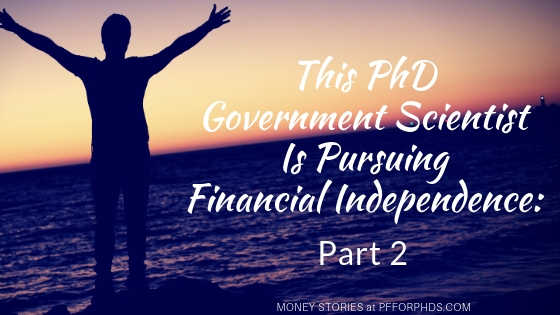 1:18 Did you make any changes to your lifestyle and spending when you decided to pursue financial independence?

Dr. Gov Worker says that lately he has put more effort into learning and reading. He says that he and his wife are putting money into tax favored accounts like their 401(k) and health savings account. They are prepaying their mortgage.

He suggests one of the best ways to get started is by tracking your finances. He prefers using a manual spreadsheet because writing it down himself is important. He says that through this, they cut out spending that they didn’t really need. He shares that he and his daughters take piano lessons because this is meaningful to them. They are making sure to spend money on what they value. He says to look at what you’re spending and think about how much joy you get out of it. Try cutting it out and seeing if you really need it. If you do find joy from it, add it back in.

5:10 Can you comment about high savings rates in the FIRE community?

Gov Worker says that savings rates can be misleading. He briefly explains the different methods to calculate savings rate. His key message is that you need to save as much as you can and live on as little money as you can and still be happy with your life. He says that their savings rate is not very high because childcare and mortgage are a big portion of their income. He says he hasn’t calculated his savings rate or set a timeline because the numbers are not motivating for him.

9:45 How does being a PhD affect how you think about financial independence?

Gov Worker shares that he was 27 years old when he got his PhD. In the FIRE movement, many people have retired by age 30. But if you get a PhD by age 26 or 27, you are unlikely to retire in your 30s. This delayed start to making an income is common for PhDs. However, Dr. Gov Worker says that being a graduate student helped him learn how to live frugally. He said he was more comfortable keeping his lifestyle lean. When he did get a job, he was making above the median salary.

He goes on to share that PhDs have invested years in obtaining knowledge and becoming experts. There is a different emotional aspect to consider retiring early when you are a PhD compared to someone who works just for money.

13:54 Once you have financial independence, do you think you’ll still use your PhD knowledge?

Gov Worker says that his happiest times have been when he’s on a sabbatical. He likes collaborating with new people and supplying knowledge, without having administrative duties. He says he can see himself travelling to work with a colleague without having to worry about funding.

He shares that when there was a government shutdown for a month early this year, he discovered what he would like to do if he didn’t have to work. He also realized that he had enough money saved to be able to live off of for several years. He says that society minimizes the value of leisure time and he is interested in pursuing what brings him joy.

19:57 Do you think other PhDs should be thinking about FIRE?

Gov Worker thinks everyone should think about financial independence. He says there are many benefits to having a year of living expenses saved up. He says he’s seen people who can’t leave a toxic workplace because they need the paycheck. He says trying to get in better financial shape is for everyone. He says if you want to try to save 75% of your income for early retirement, you should try it. He was happier in his job after he committed to becoming financially independent. He says there are many mental and spiritual benefits to being on this path. He considers financial independence an alternative path to happiness.

22:45 What are the next steps for someone who wants to start on FIRE?

Gov Worker suggests looking into the FIRE community online and reading books about it. He advises continuing to live a graduate student lifestyle in your first job and save as much income as possible. He says to set up a 401(k) before your first paycheck to get the most of your employer match. He says you can consider having roommates and don’t buy into what your peers spend money on.

When you save money, you are buying yourself options or flexibility later on. Dr. Gov Worker says that in graduate school you are expected to be fully devoted to your field. He says if he could have anything in his world, he wishes he had more time to spend with people he loves and doing things he loves.

Gov Worker says he’d love to interact with anyone interested in learning more about the FIRE movement. His blog is governmentworkerfi.com. He is active on Twitter and his handle is @govworkerfi.