In this episode, Emily interviews Christina Padilla, a PhD candidate at Georgetown University in human development and public policy earning $38,000 per year. Christina shares her top five expenses as a DC resident: rent, groceries, eating and drinking out, regular monthly expenses (i.e., phone, internet), and the copay for her therapist. They discuss Christina’s tips on leveling up her housing, meal planning, living car-free, and finding frugal fun in the city. 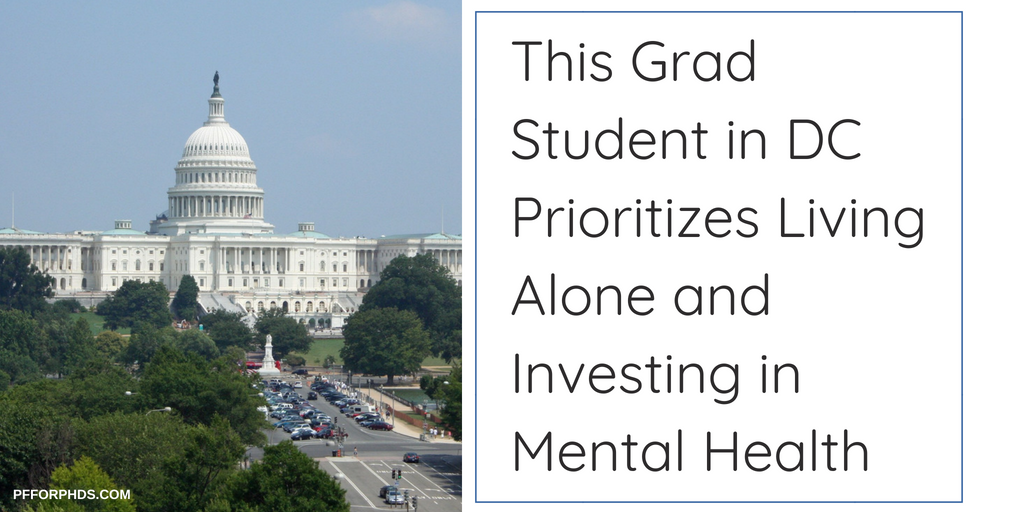 Christina Padilla is a PhD candidate at Georgetown University in Washington, D.C. She is in the psychology department, and specifically in the human development and public policy program. Her research focuses on early childhood, parenting, and early education.

Christina completed her undergraduate studies in Baltimore before taking a 2-year research position at the National Institute of Health (NIH) in the D.C. area, and then stayed for graduate school.

3:11 Q2: What are the top expenses that you have, either in a typical month or in the last month?

Christina’s top five expenses per month are rent, groceries, eating and drinking out, other regularly occurring monthly expenses like phone and internet access, and a copay for therapy, which she started in the fall.

Her first year at the NIH, Christina lived in Maryland because it was closer to her lab and her rent was only $600-$700 plus utilities, but she hated being so far outside the city. In her second year at the NIH, she moved to a group house and paid $800 a month. However, it was a very old house and required Christina to have four roommates. She lived there for three years, including her first two years of graduate school, and then decided it was worth it to live by herself. She had saved money to be able to live in a studio.

Now, Christina is budgeting with an income of $38,000 for the fall 2017 through the summer; after that, her funding situation is uncertain. She allocates $2,700 per month, and of that, rent is $1,350. For a place in D.C., that is not very expensive. Christina lives alone in a rent-controlled studio apartment in a very desirable area outside of Dupont Circle.

Transportation was once one of Christina’s top expenses, and she would spend $150 a month to get to and from campus. She does not own a car: all the costs were for public transportation. At present, she is able to walk to campus, and now spends about $40 every other month on Metro costs. Georgetown also has a free shuttle between the area she lives and the university campus.

9:13 Is the building that you’re living in popular with students?

Another graduate student living in the building recommended it to Christina when she moved out, but Christina took a different unit because the cost was significantly less due to rent control factors. A number of other Georgetown students do live in the building; there are quite a lot of young people and quite a lot of long-term residents, but very few people in between.

Christina spends about $200 per month on groceries on average. Unless she is going to a social event, she tries to cook all of her meals at home instead of ordering out. Christina has a small kitchen, which it is in a separate room from the rest of the apartment. She does not have a dishwasher or garbage disposal, but all other major appliances are included.

13:11 Have you always tried to cook at home, or is that something you decided to do along the way?

Cooking dinner at home is a habit Christina has always had; eating out was only for special occasions, rather than a casual habit. Even when she was at the NIH, she would cook every day. Her savings enabled her to take a lengthy trip to Europe before starting graduate school—Christina and another woman compared their spending and found that a major factor in Christina’s savings for the trip was that she was not ordering out, and the other woman was ordering food almost every day.

16:17 Do you have any comments on how you keep food costs down in a high cost of living area?

Christina also allocates $200 per month for eating out, but her ability to stay within both budgets was enhanced when she started meal planning. Planning meals for a week and only buying what’s necessary for that week has helped her stay within her budget. Christina enjoys cooking, and so cooking food and freezing it is both relaxing and budget-friendly.

On Sundays, Christina will make breakfast and lunch for at least Monday through Wednesday, and cook again on Wednesdays. Previously, she would try to prepare meals one day ahead of time but would often find that she was too tired or busy to do so, and ended up having to cook in the morning or buy meals. By planning meals ahead and cooking in bulk, Christina saves herself money and time.

Christina sometimes feels that $200 per month for eating and drinking out may be high, but acknowledges that D.C. is an expensive city to eat in—one brunch could cost $50 or $60. Brunch and happy hours are both popular in the city, and the costs of each can add up. The $200 also includes going out for celebrations and other social events. Christina avoids going out to eat unless it is with other people so that it stays a treat instead of becoming an expensive habit.

Other regular monthly expenses make up the fourth largest category for Christina, which amount to about $100 per month. She pays $35 each month for her phone, $43 for internet access, $13 for dental insurance, and $5 for Spotify, which is cheaper with a student membership. The cell phone price is for the cost of the actual phone; the one thing Christina’s parents still pay for is Verizon service.

In the fall, Christina was having a difficult time with her dissertation. The $200 per month she now spends on co-pays were originally going into savings and have transitioned into payment for counseling. Christina mentions that all graduate students need support but sometimes struggle with talking about it or feeling justified in seeking out help, and enjoys talking about counseling to help de-stigmatize it. She considers it an investment in herself and getting through graduate school in one piece.

23:24 Will you be finishing grad school soon?

Christina has an external fellowship for $30,000 for two years, and her department gave her an extra $8,000 to match everyone else’s stipends. She will continue to receive the $30,000 stipend but does not know whether her department will award the $8,000 again. She hopes to finish in January of 2019. She may drop her counseling sessions to once or twice a month instead of each week.

In addition to the five categories and other spending, Christina saves at least $200 per month. $100 goes into a mutual fund with Schwab and $100 goes into a Roth IRA that she set up last year.

Christina does not get a very good interest rate on her savings account and chose to invest in a mutual fund because of an episode of the John Oliver Show “Last Week Tonight,” from which she learned it would be a good option for her savings goals. She has not decided whether to use it for a mid-life expense or for long-term savings, such as a down payment on a house or for retirement.

28:03 Q4: What don’t you spend that much money on that might surprise people?

People are often surprised by how little Christina goes out to eat. Many people in graduate school tend to order in a lot for convenience. However, many people bring lunch to campus, so Christina regularly eats lunch with other people in her lab, and bringing food has not been an isolating experience.

29:24 Q5: What are you happy with in your current spending and what would you like to change?

Christina is overall happy that she is staying afloat and able to save money even though she lives in an expensive city. Many of her friends have “real” jobs where they make more money, and it is hard to compare herself to them, but she is pleased with being able to save at all. She tries to think positively about being paid to get a degree and be happy that a stipend is available, that tuition is covered, and that she has no student loan debt.

31:43 What advice would you have for someone who is starting in their first year at Georgetown?

Christina’s number one piece of advice is to be honest and reflective with yourself about your priorities in terms of housing. It’s not always possible to live in a luxury building in a great location without roommates and have low rent. There are housing options for all priorities, but you have to be honest about what you want and to be ready to make sacrifices in terms of money, location, or roommates. A lot of people live outside D.C. in Virginia or in Maryland, but many of those areas have become as expensive as D.C., so comparing prices is important.

Georgetown does not offer much graduate student housing, and what’s available is about equally expensive as other housing options if not more. Georgetown does provide shuttles, however, because the campus is not connected to the Metro line.

D.C. has a lot of free activities, especially in the summer. There are many free outdoor concerts, and all of the D.C. museums and monuments are free to visit.

No matter where you live, setting a budget and sticking to it is immensely helpful. Christina uses the free version an app called Good Budget, which allows you to create spending categories and record your transactions. The app will show a green bar decreasing as you spend throughout the month. Christina found that Mint was not helpful for her in curbing her spending and now uses Good Budget instead.

Trying to keep up with people who have “real” jobs and salaries is impossible, but it is possible to politely take charge of social situations. For example, Christina recommends offering to choose the restaurant where friends will gather and selecting a lower-cost option. Other people may not recognize that their budget constraints might be looser than a graduate student’s.

Christina opts for casually steering events with friends towards more affordable activities, and will occasionally decline to go to things if they are too expensive. She has found that most people are fairly sensitive to graduate student budgets and have no problem with less expensive activities and options.