In this episode, Emily interviews Dr. Chris Cloney, an engineering PhD turned online entrepreneur. Chris blogged about his research during graduate school, became recognized as an expert in his field, and subsequently launched his research company. Through Gradblogger, Chris now leverages his vast knowledge of online business practices to help other PhDs start their own blogs and businesses. 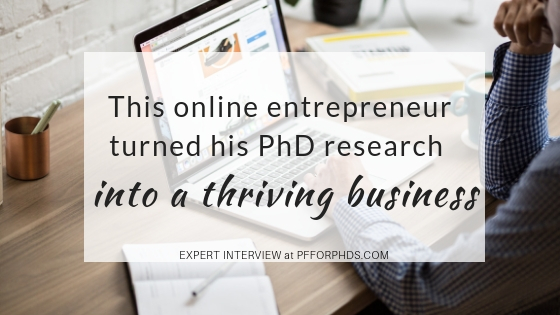 Dr. Chris Cloney has two businesses, Dust Safety Science and Gradblogger. Chris did his undergraduate degree in Mechanical Engineering in Halifax, Nova Scotia. He did his PhD in Chemical Engineering and Applied Science, but his focus was Industrial Safety within the subfield of Process Engineering. He worked nearly full time in an engineering company while he was working on his PhD. He left the job to focus full time on getting his PhD.

Chris calls himself a personal development geek, as well as a personal finance geek. When he left his job, he was intending to switch careers. His job was focused on military and explosions, and he wanted to switch to paths to industrial safety.

5:27 Can you give us an overview of your primary business, Dust Safety Science?

Chris says his thesis was on Industrial Safety, specifically fire and explosion safety in industries. He only deals with solid particle fires and explosions. He points to Apple MacBooks, for example, which are coated in aluminum polish. He explains that thousands are made each day in factories and the process generates tons of aluminum dust. The aluminum dust is a fire and explosion hazard if it is not managed properly.

He started blogging in this area at “My Dust Explosion Research” but after a couple years, he changed names to “Dust Safety Science” because it is a little easier to say. The business is online and they have four key pillars: awareness, education, connection, and change. One big motivator is to keep people from being injured, so awareness and education of safety science is important. The goal of Dust Safety Science is zero fatalities over twenty years, so they advocate at an industrial and governmental level worldwide.

7:41 What is the structure of Dust Safety Science?

Chris says Dust Safety Science started as just him, as most online businesses start with just one person. They have a website as a platform to bring people back to. They have an incident database where they track fire and explosions around the world. This is how they create material as a research company to publish on and present on at conferences. They conduct independent research as well. He has a podcast for Dust Safety Science.

Chris brought on his first help in 2017 at one hour a week. The team today is four core members. There is a content manager, virtual research assistant, technical writer, and website designer. Chris says it is a big transition from learning everything about personal branding and business to managing a team. They publish 500 blog posts a year, and this requires a healthy structure to run this research business.

Chris works from home and his businesses are his sole source of income. His team is virtual. He shares that he has a seven month old and his wife is home on maternity leave. He has his office at home.

11:44 Why did your blog turn into your business?

Chris says creating a personal brand, building online business, and being seen as the expert in an area is actually quite available to people who have higher degrees. He says one of the first steps for online marketing is to niche down really small, and Chris says that’s the definition of thesis research. He says six people read your thesis and three might actually care.

Chris was blogging about his PhD research. He says the academics in his field weren’t online and didn’t care for his blog, but industry people were interested so he started to make content for that audience. After six or nine months of blogging, he realized he had a good platform built. He was being invited to speak and he was seen as the expert in this topic. He got several job offers just from blogging about his topic. His goal was to switch careers and that was a success. He decided to focus on his online platform and build an independent research company.

Chris says step one is to ask people for money. He says he had a newsletter with 250 people on it. The first time he made money online was by emailing a company and asking them if they’d like to put their logo and description in the newsletter in a sponsor block. He said he sent the email to the company, and he got a quick reply saying yes. He’d forgot to mention there was a fee of $200 per month, so he added that in the next email. The company representative said they’d take a year of sponsorship, and Chris realized that his price was too low.

He says his newsletter is now up to 1500 to 1600 people. Every month they take on a new sponsor. Now the sponsor block space in the newsletter is $600 per month.

Chris says if you have an audience, even if it seems small, there’s a way to monetize that. They have advertising on several outputs, and they have member companies. They are also working on courses for under-served portions of their audience, like firefighters and researchers. They can also make money from consulting and speaking. Ways to monetize start becoming available once you are the biggest source of information on your topic.

18:41 Why do you think that launching a business out of your PhD research is something that should be considered?

Chris acknowledges that it can be scary to put yourself out there. But people should consider blogging because it builds your reputation in your space. It leads to job offers. Chris says he had a lot of contacts just after six months of blogging and bringing on guest posts from experts in his field. He says you build your business by putting out content and being seen as an expert, then people contact you with opportunities. Another option is advertising when others want access to your audience. Chris says he wants people to install the correct safety equipment, so he is happy to work with advertisers.

If you have an entrepreneurial spirit, Chris says this slow process of putting out content and being seen as an expert is way easier than the startup route. Startups seek funding first to get started more quickly. He emphasizes that his business transition was simply asking for sponsors on the newsletter and slowly being recognized as an expert.

22:29 Are there any other business models accessible to PhDs?

Chris says the first model is consulting. Being an academic consultant is usually very lucrative. He also lists speaking, freelance editing and writing, and building courses as other business models. Emily mentions that professors often work as consultants on the side.

Chris says Gradblogger is a platform to tell his story of starting an independent research company. Gradblogger is a website, podcast, and online resources. He says the tagline is helping PhDs build their businesses so they can change the world through research and experiences. He wants to have a role in creating superstar academics who make a big difference in their fields but are not tied to a university.

Chris says that through Dust Safety Science, he has independence and security. They will fund a Masters student. He calls himself “self tenured” because he can make his own decisions through his independent research company. Chris presents this as an example of what other PhDs could do if they start blogging to create their own business.

28:48 Do you have any advice for a PhD interested in being seen as an expert by a wider community or in starting their own business?

Chris says getting started now is important. He says getting exposed to different ideas by joining relevant communities is helpful. He recommends taking an accounting class.

Emily summarizes this as exposure. Being exposed to more ideas and different ways that people do things helps you break out of your silo.