In this episode, Emily interviews Dr. Scott Kennedy, a bioengineering PhD who now works at a start-up in a data science position. During the course of his PhD, Scott got married and had two children. While he hadn’t considered personal finance of great importance when he started grad school, he certainly did by the end. Scott considered pursuing a tenure-track faculty position, but ultimately took an industry position because the salary and location better supported his young family. This conversation around Scott’s reflection on his financial path during grad school is excellent food for thought for an early-career PhD considering different career and family formation options. 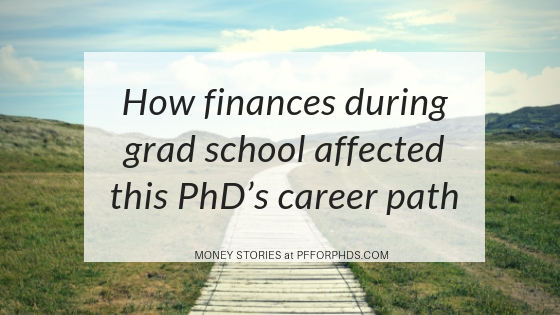 Dr. Scott Kennedy has an undergraduate degree in Mechanical Engineering. He became interested in neuroscience of motor control and the neural basis of body movement. He went to the University of Pittsburgh and received a PhD in Bioengineering. His adviser was in the neuroscience department.

As Scott neared the end of graduate school, he began to explore options outside of academia that made use of his skillset. He took a job as a machine learning engineer at a startup in St. Louis, Missouri. He is enjoying the transition out of academia and into startup culture. Scott adds that you have to be creative about how your skills apply outside of academia, because graduate school training typically funnels you into academic careers.

Scott got married in 2013, during his third year of graduate school. He says they knew they didn’t want to wait until after graduate school to start their family. They had two daughters while Scott was a PhD student. He says his adviser was supportive and he had examples of other parents in the lab.

8:40 What does your wife do? What was her job while you were in graduate school?

Scott says he met his wife in Pittsburgh when she was finishing her physical therapy degree. His wife started working as a pediatric physical therapist before they got married. Their combined income was enough for them to live comfortably. After they had children, Scott’s wife wanted to stay home but his graduate stipend was not enough money to support the family. His wife started working part time but they had to be very conscious about their finances.

10:11 When you started graduate school, what was your interest in personal finance?

Scott says he was fairly naive but he had interest. He says at the end of undergrad, he developed a spreadsheet to track his spending. Although he kept a budget, he didn’t have any financial goals. He wasn’t thinking about saving for retirement. He had some savings tucked away but for no reason. He was focused on simple living.

Emily shares that she was in a similar place when she was in graduate school. However, she had this sense of “doing the right thing” with her money and that motivated her to learn. Scott shares a story about his friend who was shocked that he didn’t have a Roth IRA yet. Scott thought investing was for people with money, then he learned that he should start during graduate school.

14:40 What was your transformation process into someone who cares about personal finance?

Scott says his first step was saving for retirement. Then, he wanted to purchase an engagement ring and pay for a wedding. He saw that his savings, his safety net, was being drained. He realized that he had to become more serious about budgeting and manage finances in partnership with his wife. He says personal finance is a balance between living your life, having goals, and having security. He adds that childcare was another big factor. Cost of childcare is about the same cost as rent.

17:27 What frugal strategies did you put in place to adjust to the new expenses?

Scott emphasizes that they leaned on their families a lot. They were fortunate to have families willing to support them and help them travel, but their vacations were to go home to see family. At home, they spent time at friends’ houses and chose very low cost entertainment options. They stopped going out to eat and would go for a run instead of having a gym memberships. Scott says that taking little steps adds up in savings in the long run.

20:34 How did finances during graduate school affect your career path?

Scott says two years before he graduated he thought carefully about what he wanted to do. Before he started graduate school, he thought he wanted to work in engineering and rehabilitation. He fell in love with science and could see himself being an academic and working as a professor. He felt like he wanted to go that route until he saw one of the graduate students from his lab defend, work as a postdoc, and apply to jobs while also having a family. He said there was a research faculty member in the lab as well who had a family and was having a hard time getting a faculty job. Scott says there were also stories of professors who got divorces during the tenure process.

Scott says he didn’t feel like he was able to support a family through a postdoc and a search for a faculty position. He says that even if everything worked out for him, his kids would have been in high school by the time he got tenure. He shares that this was difficult for him to comes to term with. After he realized this, he started to look for jobs outside of academia.

Scott says he’s happy in his position now because he has freedom, flexibility, and autonomy in his work. He feels he works on interesting problems. He can work with leadership and have a more say in the work than you can as a graduate student. The location in St. Louis is closer to his family.

26:54 If you could go back and give yourself financial advice, what would that be?

Scott admits that as an early graduate student, it’s hard to know what your goals are. He advises that to the extent you can, think a couple years ahead. He says have saving goals and investment goals.

Emily advises that people at least consider buying a house if you’re in a place with a housing market that makes sense for graduate student budgets. She also says that it’s a reasonable assumption that anyone’s financial responsibilities will increase over time. Graduate school is a fairly long period of time and chances are that you will have more responsibilities.

Scott shares that he didn’t expect the number of weddings and the cost of going to them. He says that he regrets not being able to go to some weddings. Scott advises to find balance between living your life and having savings so that you can have buffers and cushions so you have money for unexpected expenses.