Lifestyle inflation is one of the great personal finance sins that just about everyone falls into at one point in time or another. However, as a graduate student you have the opportunity to anticipate the temptation to inflate your lifestyle that will come with your first Real Job and prepare yourself to fight it using the financial skills you’ve learned during grad school.

A version of this article originally appeared on GradHacker. 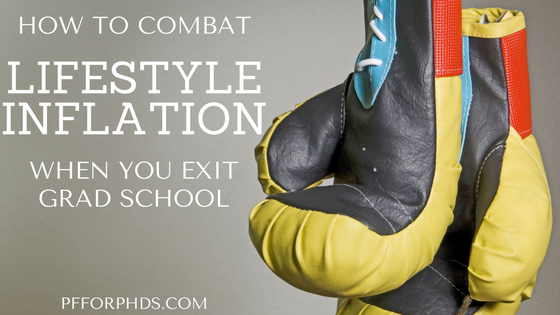 What Is Lifestyle Inflation and Why Is It Damaging

Lifestyle inflation is the mindless increase in spending as income rises. Generally speaking, people spend (virtually) all of their take-home pay (the average personal savings rate of Americans has been hovering below five percent in recent years). Even as income generally increases with career progression, expenses find a way to increase as well without the individual intending them to. This makes beginning or accelerating debt repayment or saving quite difficult, as lifestyle deflation is usually perceived as unpleasant.

My main objection to lifestyle inflation is not that it’s wrong to spend more as you earn more but rather that the spending increase is unintentional and undirected. The mission statement of my business includes encouraging PhDs(-in-training) to “make the most of their money,” which means optimizing your use of money to maximize your life satisfaction. Spending more across the board as your income increases isn’t optimized; rather, you should minimize the increase in the expenses that you care little about so that you can direct your income toward goals and spending that matter more to you.

How Graduate School Prepares You for Battle

Graduate students who live only on stipends for at least a couple years have a unique position with respect to lifestyle inflation. During graduate school, our incomes were held to a lower level than they would have been had we not pursued additional education. Therefore, our (most of the time initial) adult lifestyle was set at a low level, which forced us to budget, practice frugality, and discover the true distinction between needs and wants (all valuable skills to carry forward).

The salary jump that comes with the first post-grad school Real Job presents the opportunity for serious lifestyle inflation. After all those years of frugality, don’t we deserve to finally have nice things? Yes, we do, but keep in mind that the nicest things will come not from mindless lifestyle inflation but from intentional lifestyle increases.

How to Fight Lifestyle Inflation

How do you increase your lifestyle without inflating it?

The most common advice for the general population in combatting lifestyle inflation is to “live like a college student,” which means to keep your cost of living as low as it was during college for as long as possible. I think this was great advice for Baby Boomers, but I’m less convinced of its applicability to Millennials due to the many perks and amenities now offered on college campuses. However, I think “live like a grad student” (or the M.D. version, “live like a resident”) is generally good advice, with a caveat that you should selectively and judiciously treat yo’ self.

While you’re still in grad school, consider what aspect(s) of your lifestyle you would most like to change. Are you itching to live alone for once? Sick of “beans and rice, rice and beans?” Ready to overhaul your wardrobe? Dreaming of a vacation that doesn’t involve a conference? Identify the aspects of your lifestyle that would bring you the most satisfaction if you were able to throw more money at them.

Once you’ve landed that coveted Real Job, default to maintaining your spending as it was in graduate school across the board, but build in some spending increases in those areas that matter the most to you. From the get-go, you’ll also need to set up a serious savings rate that will go toward your savings account, retirement account, loans, etc., especially if you weren’t able to work on those financial goals during grad school.

When my husband and I transitioned from Ph.D. training to Real Jobs, we decided to focus our lifestyle increases in two areas and kept all the rest of our spending as similar as possible to when we were in grad school. (Oh, and as a one-time splurge we bought a few pieces of new furniture from Ikea).

First, we moved from a medium cost-of-living city (Durham, NC) to a high cost-of-living city (Seattle, WA). This move automatically increased our spending in several areas even while we kept our perceived lifestyle constant. We made sure to find a rental that fit comfortably within our budget (we downsized), and after that didn’t worry too much about the fact that we were spending more on housing, utilities, and food.

Second, we had a baby, which of course opened up totally new spending opportunities for us.

With just those two areas of intentional increase and maintaining the saving percentage we established in graduate school, pretty much all of our income increase was spoken for. I’m very glad that we focused our lifestyle increase in the areas that mattered most to us. Inflating our lifestyle in any other areas (e.g., buying a more expensive car) would eventually have caused us to sacrifice in another area or decrease our savings rate.

What lifestyle increases would you like to implement once you have a Real Job?