In this episode, Emily interviews Dr. Jenni Rinker, a mechanical engineering PhD currently working as a researcher at the Denmark Technical University. Jenni paid of $62,000 of student loans from her undergraduate degree while pursuing her PhD at Duke University. Her average payment was approximately $1,500 per month on a post-tax income of $2,700-$3,000 per month. Jenni shares her motivation for setting her lofty debt repayment goal and the practical strategies she used to accomplish it. After paying off her student loans, Jenni even saved enough money to take six months off from work post-defense. 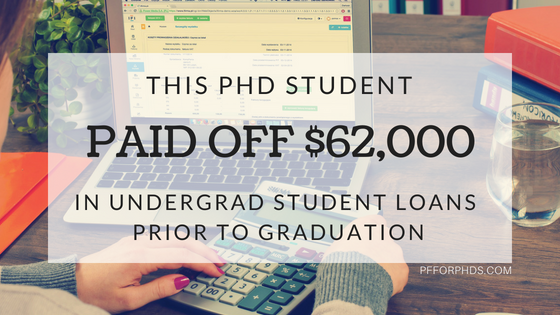 2:28 We’re talking today about your debt repayment journey. Can you tell us about this?

After undergrad at Harvey Mudd in 2011, Jenni had $62,000 student loan debt. She set the goal to repay the full debt during her PhD. She accomplished this goal, paying off the debt in 3 years and 7 months.

3:48 Can you tell us more about what kinds of loans you had?

Jenni kept a spreadsheet, a valuable tool that she used to track her debt repayment. She only had the option of unsubsidized student loans because she comes from a middle class household. At the time she started graduate school in September 2011, Jenni had $62,00 total from nine different loans. Federal student loans from Sallie Mae and Nelnet made up $28,000, at 6.8% interest rates. Jenni’s private student loans came to $34,000 total. Her single largest loan was from Alaska Advantage, a loan of $8,500 at 7.3% interest. She had several low interest (3-4%) private loans from Wells Fargo.

5:54 What was your income during your PhD?

Overall, Jenni’s post-tax income varied from $2,700 to $3,000 per month throughout her PhD. Before she started graduate school, Jenni was awarded the National Science Foundation Graduate Research Fellowship. This fellowship provides an annual income of $34,000 for 3 years. When she started, Duke University offered her income in addition to her NSF fellowship. After the NSF fellowship period ended, Jenni won another external fellowship through the Office of Science that offered $3,000 per month.

However, Jenni started graduate school in debt and did not have any savings or assets she could use to reduce her debt.

10:50 Why were you so determined to pay off student loans during grad school?

Although student loan repayment could have been deferred while she was in graduate school, Jenni was uncomfortable with debt and letting interest accrue. She thought that keeping the debt would limit her choices after graduate school. The student loans felt like a weight over her head that was growing every day, and she wanted the freedom that would come after debt repayment.

Jenni decisively started paying off her student loans as soon as she started graduate school. She saw that her income was higher than her monthly expenses, so she made it her priority.

Jenni committed to her financial philosophy that the money earned from her job goes to rent, utilities, food, loans and other essential expenses first and foremost. Money for her other interests had to come from side income. Jenni earned extra income as a technical copyeditor. She had private clients and worked for the American Journal Experts. She funded several trips from her side income.

Spreadsheets were Jenni’s most important tool. She had a spreadsheet for each year, where each month had a tab. She calculated that $1,300 per month needed to be budgeted for student loans in order to pay off the debt in 4 years. Her living costs, the “monthly nut,” were $800 to $900 per month. She kept frugal habits, such as rarely going out to dinner.

Jenni implemented the strategy of paying herself first. Right after receiving her paycheck, she made her loan payment so the $1,300 was out of her account immediately and she wouldn’t be tempted to use it elsewhere. However, Jenni paid her student loans instead of building up her emergency fund, which was drained after she needed a car repair.

Jenni paid her loans manually, so she could pay the highest interest loans first. Her biggest loan also had the highest interest rate, so she prioritized this one first. Though she had nine different loans, she focused on paying off one loan completely before paying towards another loan.

Her story is an example of the debt avalanche method. Jenni prioritized bigger loans with higher interest to pay off first. She was motivated by paying as little interest as possible. This is in contrast to the debt snowball method, where a person pays off the smallest loans first, to feel motivated by these easy wins.

Jenni also identified where she overspends. She would take out cash to be more aware of her expenses.

28:23 Did you have any speed bumps during your debt repayment journey?

Though Jenni had one instance where she paid for car repairs, she feels like she got lucky with no major financial setbacks. Paying her student loans was her highest priority, and she ended up paying about $1,500 per month on average over three years and seven months. She paid her loans back faster than she expected.

29:53 How did you feel after paying off your student loans? Did anything change in your life?

Jenni realizes that this is an unusual accomplishment. She posted on Facebook and got many congratulations. At the time she made the final student loan payment, Jenni was still working on her dissertation.

She was so used to immediately using $1,300 for student loans, that she started saving that amount each month for travel. After she defended her PhD, she had stress-free travel for 6 months. She went to Patagonia, Europe, and traveled around the United States. Jenni already had a job lined up, so her travel was a true vacation to celebrate finishing her PhD and repaying her undergraduate debt. Jenni learned that traveling is very important to her, so this experience rejuvenated her and put her in the right mindset to start her postdoc.

34:30 Is there anything you wish you had done differently?

Jenni wishes she had rebuilt her emergency fund after she drained it for her car repair. Overall, she’s satisfied with her debt repayment journey. She balanced frugality with having a good quality of life.

During debt repayment, Jenni allowed herself flexibility for how much she paid every month. In the beginning, her repayment was more aggressive but she relaxed as time went on. She knew that in an emergency, her family could support her and she could pay her parents back for financial help in a tough situation.

38:14 Did this experience affect how you approach personal finance?

When Jenni moved to Denmark, she stopped tracking her daily expenses so carefully and has allowed herself to indulge in treats and go to cafes.

However, her budget spreadsheet is still her most valuable tool. She created her own spreadsheet template that makes sense to her. Jenni briefly considered using software budgeting tools like Mint, but never ended up trying one out. By using her own spreadsheet that she updates manually, she feels like she has more control of her budget. This manual system forces her to actively consider how she’s spending her money.

43:00 What advice would you give to someone starting graduate school with student loans?

First, Jenni recommends that graduate students with student loans set realistic goals. Your income must be more than your expenses, and you still need to have a good quality of life. Figure out your “monthly nut” and compare it to your income. Then, identify your problem areas in your expenses.

Jenni’s inspiring story is applicable to anyone in any kind of debt repayment scenario. The financial strategies Jenni used can help graduate students pay off their own student loan debt.