Pursuing a PhD and post-PhD jobs usually means frequent professional and personal upheaval. Changing jobs/”jobs” and moving are typical for each stage of training and possibly career: posbacc programs or jobs, master’s/PhD programs, postdocs, and Real Jobs. Every time you change jobs or move, your routines and habits are upended, including those that affect your finances. The upside of these frequent transitions is that each time you give yourself a clean slate upon which to write new habits. That’s great news for anyone with a degree of dissatisfaction with their current habits. 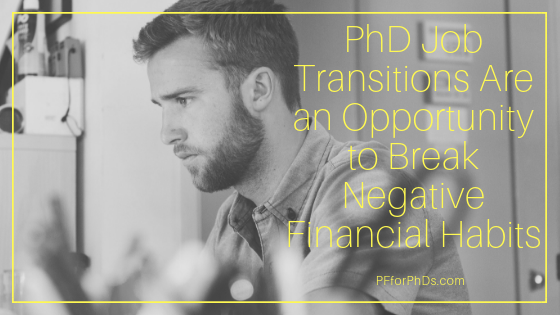 I recently read Better Than Before* by Gretchen Rubin, which is about how to create and maintain habits. The quotes included in this article are from the chapter “Temporary Becomes Permanent: Clean Slate.” While it is not a financial book, the strategies included in Better Than Before can be applied to your financial life, and the Strategy of the Clean Slate struck me as particularly useful for PhDs.

Why the Clean Slate Works

A great proportion of our decisions each day are not ones we make consciously but rather are part of our routine or standard responses to stimuli. This is great when you have cultivated positive habits or at least are not in any negative habits. But a negative habit can be incredibly challenging to break under normal circumstances.

Any beginning is a time of special power for habit creation, and at certain times we experience a clean slate, in which circumstances change in a way that makes a fresh start possible–if we’re alert for the opportunity.

Experiencing a clean slate – a wiping away of your previous habits in part or much of your life – can greatly benefit you if you had any negative habits or even a desire to start new positive habits. The old stimuli that prompted you into your negative habit are no longer there, and instead you can tie your new stimuli to positive habits. There is also an opportunity for a strong change in your self-conception, such as “In my new job/city, I am a person who ___.”

There’s a magic in the beginning of anything. We want to begin right, and a good start feels auspicious… Because we’re creatures of habit, the first marks on that slate often prove indelible. We should start the way we want to continue.

I now pay very close attention to the first few times I do anything because I know those decisions will shape my baseline habits; to deviate from them will feel like a deprivation or an imposition.

The slate may be wiped clean by a change in surroundings: a new apartment, a new city, even rearranged furniture. Or some major aspect of life may change: a new job, a new school, a new doctor.

Job changes for PhDs come relatively frequently throughout training and sometimes following, and many or all of those job changes may very well involve a move. A new job in a new city is just about the cleanest slate you can get when it comes to your habits (not including changes in the members of your family): new home, new job, new co-workers, new commute, new city to learn.

Not only are you in a different environment with your old triggers and routines wiped away, but the people surrounding you are no longer reinforcing your prior habits and associating you with them. You have a chance to forge relationships without succumbing to any negative habits.

The entire point of a habit is that it takes little to no conscious decision-making to carry out. If you are aware of any mindless spending that you currently engage in, resolve to drop it with your upcoming clean slate (if not before!).

Mindless spending is spending that you neither need nor even truly want to do. Perhaps it gives you some satisfaction, but it’s all too fleeting. You pick up a coffee every day during your commute because that’s what you always have in your hand on your way in. You browse a certain store and make a purchase on the same day of the week because that’s how you kill time in between work an an evening activity. You go out with the same people to the same bar/restaurant/club every weekend because that’s where you went when you first met them. Somehow these actions became habits even as your desire to do them faded. You may not have even realized the cumulative effect they were having on your finances.

With your clean slate, you have the opportunity to drop these old habits and begin how you want to continue, e.g., brewing coffee at home, taking a route that doesn’t pass any shops, and meeting people through fun and less expensive activities.

Living Beyond Your Means

In many graduate programs and at many places, limiting your spending to the means provided by your stipend/salary is not possible or at least not palatable. In those cases, accruing debt, usually student loan or credit card debt, is a necessary evil. Still more PhDs (in training) accrue debt because of a lack of sufficient motivation to avoid it.

Living beyond your means is a negative financial habit, necessary or not. When you start a new, higher-paying job, make a clean break with that habit. In your new job, you are A Person Who Lives Within Your Means. In fact, you should not only resolve to not accrue any new credit card (or similar) debt, but you should start repaying your accumulated debt. If credit cards were your debt of choice, stop putting new charges on them entirely.

Hiding Your Head in Sand

Sometimes a negative financial habit is simply the absence of a good financial habit. Your financial state during grad school or after can be so discouraging that you stop looking at it entirely. You might slip into being unaware of the balances in your checking and savings accounts, the balances on your credit cards, the total of your student loan debt, the value of your investments (if any!), etc.

At some point and after some healing, you’ll start looking at your finances again – perhaps when you have a higher income and the future looks rosier. With your clean slate, leave behind your habit of hiding your head in the sand and put in place a new habit of regularly looking over your finances comprehensively, even if it’s painful at first.

Keeping Up with the Joneses

Keeping up with the Joneses is a negative financial habit for anyone, but it’s particularly impossible for PhDs on trainee income. You don’t want to be in that habit when your higher income rolls in, as you might actually be able to make a go of keeping up. Do whatever you need to do to (leave/filter social media, stop watching HGTV) to keep the Joneses out of sight and out of mind.

The Strategy of the Clean Slate can help us launch a new habit with less effort.

With your clean slate, adopt a new identity as a person who practices positive financial habits and is actively working to improve your financial health.

Tracking your spending and creating a spending plan (a budget) are fundamental tools for managing your finances well.

Tracking can be done relatively automatically with software, so the easiest way to implement this habit is to sign up for Mint/You Need a Budget/similar, hook up your bank accounts, and check on your spending periodically (at least once per week).

After you have an idea of your expenses, you can start projecting them with a budget, which will help you be mindful about your spending in your trouble areas. You may have to update your budget frequently if you’ve recently moved, but after some time checking in with it once a month or more will become automatic.

Track Your Net Worth

When my husband and I transitioned to our first post-PhD Real Jobs, I started manually tracking our net worth. Yes, our Mint account has it, too, but I liked my own formatting. Once per month on the 1st, I copy all of our account balances into an Excel spreadsheet and update my graph. You don’t need to check frequently for the habit of tracking your net worth to be valuable. After all, “That which is measured, improves.”

That a candidate will attempt to negotiate a job offer is almost always expected. (Grad school offer letters are an exception, though some students do attempt to negotiate. Negotiating a postdoc offer is more common than you might think.) If your clean slate comes with a new job, be sure that you negotiate that job offer (and every one that follows). You may make an exception if the offer is clearly and objectively on the generous side of appropriate, but even then you can still try to negotiate some benefit. A raise gained through negotiation is the easiest money you’ll ever earn, and it compounds throughout your career!

Automatic Saving and Being “a Saver”

Post-clean slate and with a higher income, you are a saver, no matter what you were before. Enforce this positive financial habit by setting up automated transfers to your savings account, loans, or investments, depending on your goal. Incrementally increase your savings rate over time.

Investing can be very intimidating to someone just starting to get their finances in order. It’s doubly intimidating for someone who doesn’t have access to a 401(k)/403(b)/similar like a grad student and some postdocs. With your clean slate, put in place the positive financial habit of investing (if that’s an appropriate financial goal). If your new job offers a retirement account match, by all means take full advantage, and invest beyond that up to your goal amount. Never leave match money on the table!

It’s a shame not to exploit the power of the strategy of the Clean Slate when it presents itself. For instance, the time of moving introduces so much upheaval into our customary habits that change becomes far easier. In one study of people trying to make a change–such as changes in career or education, relationships, addictive behaviors, or health behaviors including dieting–36 percent of successful changes were associated with a move to a new place.

The Downside to a Clean Slate

While the clean slate offers tremendous opportunity for forming new habits, it can disrupt a person’s existing good habits by eliminating a useful cue or breaking up a positive routine.

To this point in the article I have largely assumed that you have some negative financial habits that can be eliminated by a Clean Slate, and I’ve suggested positive financial habits to fill the vacuum. But you also may well have positive financial habits that will be jeopardized by the Clean Slate. It’s understandable that you habits will be disrupted by a Clean Slate as dramatic as a move and job change, so as soon as possible (before you feel settled and ready) jump right back into your old positive habits so you don’t slide into negative habits in their absence. As much as possible, maintain monitoring your habits through your transition so you have an accountability system urging you to return to them as soon as possible.