A version of this post was originally published on GradHacker.

During my presentations on personal finance for grad students, I am frequently asked about debt – more specifically, when and how to pay off debt. Debt often appears to be an attractive option for low-income individuals like graduate students because it can enable you to “buy now, pay later” – acquire possessions or experiences now and spread paying for them out over months or years into the future. However, debt is even more of a trap for low-income people than it is for those with higher incomes because a greater percentage of your pay or cash flow going forward is going to be tied up in debt payments. This leaves even less flexibility in how the person uses his money than he would have without the debt.

Many if not most graduate students are in one or more kinds of debt, be it student loans (from undergrad and/or grad school), an auto loan, credit card debt, a mortgage, personal loans, etc. How a graduate student should manage her debt depends on her ability to repay the debt, her personal disposition toward debt, and the type and terms of the debt. Students who are able to pay down debt during grad school must choose their repayment method and balance that goal with other financial priorities. 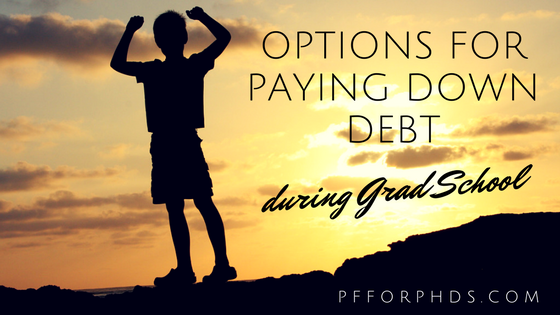 As a graduate student, what is your current ability to repay debt?

If you are taking on student loan debt during graduate school to pay for your tuition and fees or living expenses, any debt repayment you make is essentially trading your existing debt for student loan debt. While using student loan money to repay other debt might be attractive based on the interest rates, keep in mind that student loans, unlike all other debt, are virtually never discharged in bankruptcy. However, if you are struggling to make ends meet, in terms of taking on new debt, student loans are often preferable to high-interest debt such as credit card debt.

However, if you receive a stipend and tuition waiver, you may have the ability to make your minimum debt payments as well as meet other financial goals, whether they are saving or accelerated debt repayment. Students who grasp the power of compound interest will be motivated to cut back on their spending somewhat to put money toward debt repayment or investing.

People’s attitudes toward debt vary widely. On one end of the spectrum, some people view debt as a useful tool to help you live a better life or build wealth. (These people might be proponents of the permanent income hypothesis and encourage grad students to calibrate their lifestyles toward their expected future income rather than their current income.) On the other end, some people view debt as a dangerous burden that should be repaid as quickly as humanly possible. While you likely fall somewhere between those two extremes, it is important to reflect on how your debt makes you feel.

People who are quite bothered by their debt are likely to prioritize debt repayment over other financial goals. People who are less sensitive to the risk that comes with debt may use a more mathematical analysis to determine financial priorities, perhaps by paying down only high-interest debt before starting to invest for the long term. Any of those decisions are legitimate if they are congruent with the individual’s disposition and the ‘math’ of the situation (the terms of the debt) has also been taken into consideration.

While it’s difficult to define any particular type of debt as “good” or “bad,” the terms of your debt should certainly influence how high of a priority accelerated repayment is. The chief term to pay attention to is the interest rate. What you used the debt for should also influence your repayment priorities. In some cases, you have an appreciating asset that collateralizes the debt, such as a home (in most cases), but other debt may have a depreciating asset as collateral, such as a car, or be uncollateralized. The dangerous aspect of uncollateralized debt or debt on a depreciating asset is that you don’t have associated property to sell to completely pay off the debt if it becomes necessary.

Federal student loan debt and often private student loan debt is a unique type of debt because your student status and income can influence the repayment terms. While you are a half-time or more graduate student, you may be eligible for loan deferment, which means that no payments will be due. If your loans are subsidized, no interest will accrue during deferment. If your loans are unsubsidized, interest will accrue during deferment, and the interest will capitalize at the end of the deferment period and become part of the principal.

Deferment is a good option for graduate students because it gives the payer more flexibility to skip or shift around the now-optional payments if it is inconvenient to make them. Students could even save up for long periods and pay down the debt in lump sums. All students should make a plan for loan repayment during and/or following grad school, even those who cannot make progress until deferment ends.

Graduate students who have taken out mortgages on their homes during and since the Great Recession likely have quite a low interest rate on their mortgage debt. The long-term average rate of inflation in the US is between 3 and 4%, which is similar to recent mortgage rates for top borrowers. After you reach 20% equity in your home and stop paying Private Mortgage Insurance, there is not much of a mathematical argument for making more than the minimum payments on the mortgage.

The terms for consumer debt can vary widely. In the current low interest rate environment, it’s not uncommon to have consumer debt at or close to 0%, but it can also easily be at 15-30%. How you prioritize paying off consumer debt may have a lot to do with the interest rate and other terms. Some debt offers come with a no payment or zero interest period of one or more years, sometimes contingent on the debt being paid off in full during that time. The repayment terms for consumer debt sometimes come with catches, so you should carefully abide by them or risk paying large sums of money in interest or hurting your credit score. Debts that are held by a family member or friend may have more favorable terms, but your relationship will be colored by the debt until it is repaid.

While it can be argued that student loans and mortgage debt have been used to buy appreciating assets, consumer and personal debt usually doesn’t have the same positive associations. For this reason, students may choose to prioritize repaying this debt just to get it out of their lives.

If you have two or more debts that are immediate-priority payoff goals, there are two popular methods for choosing how to prioritize them: the debt snowball and the debt avalanche methods. Both methods work off the principle of intense focus on only one debt at a time.

With each method, you make the minimum payments on all your debts and throw all your excess cash flow at your top priority debt until you completely knock it out. With the debt snowball method, you rank your debts from lowest payoff balance to highest payoff balance and work on the smallest debt first. With the debt avalanche method, you rank your debt from the highest interest rate to the lowest interest rate and work on the most expensive debt first.

You likely recognize that there are financial goals other than just paying down debt that you might set during grad school, such as saving a cash emergency fund, saving for short-or mid-term purchases, and investing for the long term. Only you will be able to determine how those goals rank in comparison with accelerated debt repayment, after considering your personal disposition and the math involved with each scenario.

What is your experience with debt repayment during grad school? Which decisions regarding your debt are you happy with, and which decisions do you regret?