Grad students and postdocs typically spend a significant portion of their income on groceries and restaurant food; these budget categories are often targeted by trainees who want to cut back on their spending in favor of reaching other financial goals. Forming new habits around cooking and eating is challenging but certainly not impossible, even for busy researchers. 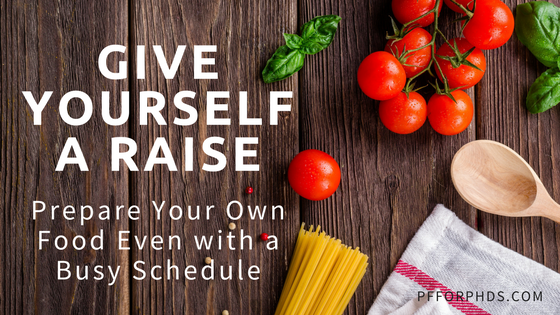 A version of this article was originally published on GradHacker.

If you are looking to “give yourself a raise” by reducing your spending on food, the go-to suggestions are to:

Sometimes trainees justify their high food spending by citing long hours on campus and variable schedules. They tell themselves they don’t have time to plan, shop, or cook or they can’t commit to being home by dinnertime. They are often inexperienced in the kitchen, which means they rarely cook or are slow when they do.

Early on in my grad school career, I fell into some of these high spending patterns. I ate out with classmates because I wanted to bond with my peers. I wasn’t very capable in the kitchen, subsisting largely on sandwiches, fruit, salads, and canned goods. When I did cook, I picked rather involved recipes from cookbooks with several ingredients I wouldn’t use again, and making each meal took a large investment of time. I often stayed late on campus, and I ate far too many meals at Panda Express because I hadn’t planned ahead.

Over the course of my grad school career, I slowly improved both my time management and food preparation skills to the point that I was able to reduce the amount of money I spent on food while still feeling satisfied with what and with whom I was eating. My health also improved in parallel with my nutrition.

Sometimes the stumbling block in our efforts to reduce our spending is not that we don’t know how to spend less but rather that we don’t understand how to adjust our lifestyles to meet our new goals. The remainder of this post will not focus on how to spend less money, but how to make typical strategies for spending less money on food more palatable to a grad student or postdoc.

Think ‘Food Assembly’ or ‘Food Preparation’ Rather than ‘Cooking’

Novices in the kitchen may be intimidated out of preparing much of their own meals because they don’t know how to replicate, especially in a time-efficient fashion, the meals they are accustomed to eating in their parents’ homes, dining halls, or restaurants. But feeding yourself doesn’t have to involve skilled or elaborate cooking; you can reframe it as food assembly or food preparation.

Identify a few simple (components of) meals that you like that have only a single or a small number of ingredients and may or may not involve ‘cooking.’ You’re the only one you need to please with your meal, so don’t worry about whether it would be worthy to bring to a potluck.

Some of my favorite meals during grad school that involved little to no cooking were spinach salads loaded with vegetables and hardboiled eggs or ham, curry tuna salad paired with fruit, tuna mashed with avocado, a taco bowl, and a bunless cheeseburger with steamed broccoli.

Get into a Groove

Repetition is an amazing time-saver when it comes to eating out of your own kitchen. You don’t have to master every cooking technique out there; you just have to become competent at preparing a small number of meals that you like. Rotate through each meal in your wheelhouse at whatever frequency you need to keep from getting bored; add in new foods and techniques slowly so you don’t become overwhelmed.

Some personalities are more amenable to this strategy than others. My husband has eaten virtually the same breakfast and lunch nearly every weekday for years, and before we were married he only ever cooked a handful of different dinners; this amount of variety is satisfying to him and certainly has cost him very little in terms of time and money. Disabusing myself of the idea that I needed (or wanted) a different meal every day of the week was one of my big breakthroughs in committing to preparing my own food while pursuing my PhD.

Establishing patterns in your weekly or monthly meals also makes grocery shopping much easier; you don’t have to spend much time making a list or running to the store for forgotten items.

I didn’t have many peers in graduate school who seemed to keep a fixed work schedule, and I don’t remember any non-parents doing so. On top of the large number of hours many researchers put in each week, the nature of research often demands time flexibility. I frequently found myself staying on campus well past what my body told me was dinner hour to finish up labwork, meet up with classmates for a study session, or knock out some administrative tasks.

Early on in grad school, I didn’t plan ahead for these evening workday extensions; while I was quite consistent in bringing lunch to campus daily, I was ‘forced’ to buy dinner on campus if I wanted to stay late. Once I acknowledged that I would be eating dinner on campus from time to time, even if I didn’t know exactly on which days of the week that would occur, I started to plan for it. I prepared a few refrigerator-stable, microwavable, single-serving meals each week to keep in my office for the late nights, replenishing my supply as needed.

My favorite microwavable dinners to keep on campus were chili, split pea soup, flaxseed meal pizza, Mexican lasagna, and pasta with sauce. Full meals aren’t even needed in many cases to help you resist the convenience food available on campus; there’s really no reason to not keep some snacks around to tide you over. Easy room-temperature or refrigerator snacks to keep in your office are instant oatmeal, nuts or nut butters, yogurt, hardboiled eggs, cheese, raw vegetables, and fruit.

Don’t Allow Yourself to Get Too Hungry

‘Never go to the grocery store hungry’ is great advice; hunger can sap our willpower to stick with our eating plan, causing us to overbuy expensive, unhealthy, or unnecessary food. As a graduate student working sometimes long and late hours, I realized that allowing myself to become quite hungry caused me to make poor eating choices on campus and at home in addition to at the grocery store. It’s pretty difficult to arrive home hungry and take the time needed to prepare a meal, especially for a slow cook.

I started flipping my schedule around; nearly every weekday evening, I ate a pre-prepared dinner (or snack) right when I arrived home, and then cooked subsequent days’ meals later in the evening when my hunger was already satisfied. An alternative is to do as much food preparation as possible in advance (washing, chopping, saucing, etc.) so that finishing your meal when you arrive home takes a minimal amount of time.

Acquiring a slow cooker halfway through grad school absolutely revolutionized how I prepared food; it was my introduction to batch cooking. Batch cooking is preparing multiple meals at once to freeze or refrigerate until they are consumed. Slow cookers are not the only way to batch cook, but they are an incredible tool for preparing large quantities of food at once with relatively little active work or skill needed. Batch cooking usually doesn’t take any or much more time than preparing a single meal, so it’s perfect for a busy trainee. A single person can prepare a meal of 4 or 8 servings and eat for a week off that one-time effort!

The connections you make in graduate school are very important for your career; I would not suggest that you skip chances to engage socially with your peers simply because you are trying to spend less money on food. You can, however, often socialize in a manner that limits the damage to your budget. For example:

Changing your eating habits is certainly not easy. However, by overcoming the challenges to eating out of your own kitchen while you are still a student or postdoc, you can effectively give yourself a raise both during your training and throughout the rest of your life.

How have you kept your food spending low as a graduate student or postdoc?