There have been more developments with the GOP tax plan (the Tax Cuts and Jobs Act) with respect to graduate students’ tuition benefits.

Last week, I gave my interpretation of how the House bill selectively eliminates one form of tuition benefit (tuition reductions) while leaving in place another (tuition scholarships).

Since my writing, an amendment was proposed to maintain the tuition benefits as they currently are, but it was defeated. The House bill is expected to be voted on tomorrow (Thursday, November 16, 2017).

You can find more information and action steps on the NAGPS website.

The Senate version of the tax bill has also been released in the last week, and it apparently does not include the same changes to graduate student tuition benefits that was in the House bill.

If both bills pass as currently written, they will go to a conference committee to create a compromise between the two versions. Then, the agreed-upon version will go back to the House and Senate to be voted upon. It is still important to voice your opinion about this particular provision of the bill to both your representatives and senators so that either the conference committee does not include changes to the tuition benefit in the final version of the bill or your Congresspeople vote against the bill if it does. 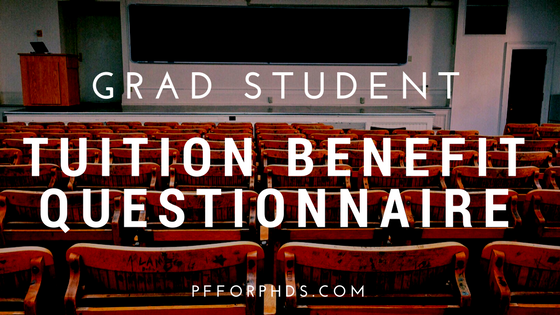 In the meantime, I am collaborating with two current graduate students, Andrew McCubbin and David Dixon, to figure out which universities are using section 117(a-b) vs. 117(d) for their tuition benefits. My purpose is not to discourage anyone from taking action opposing the TCJA but rather to help students with their personal financial planning and advocacy at the state, university, and department level, should the TCJA pass with the tuition benefit cut in place.

We have a survey up right now; would you please fill it out to the best of your ability and share it with your peers? In the next few days, we’ll start sharing our determinations from the survey on this results page. Also, feel free to comment on this post or email me if you have relevant information but don’t want to fill out the survey!